Little Mila was born with a birthmark on her neck that was so large it looked like a second head. 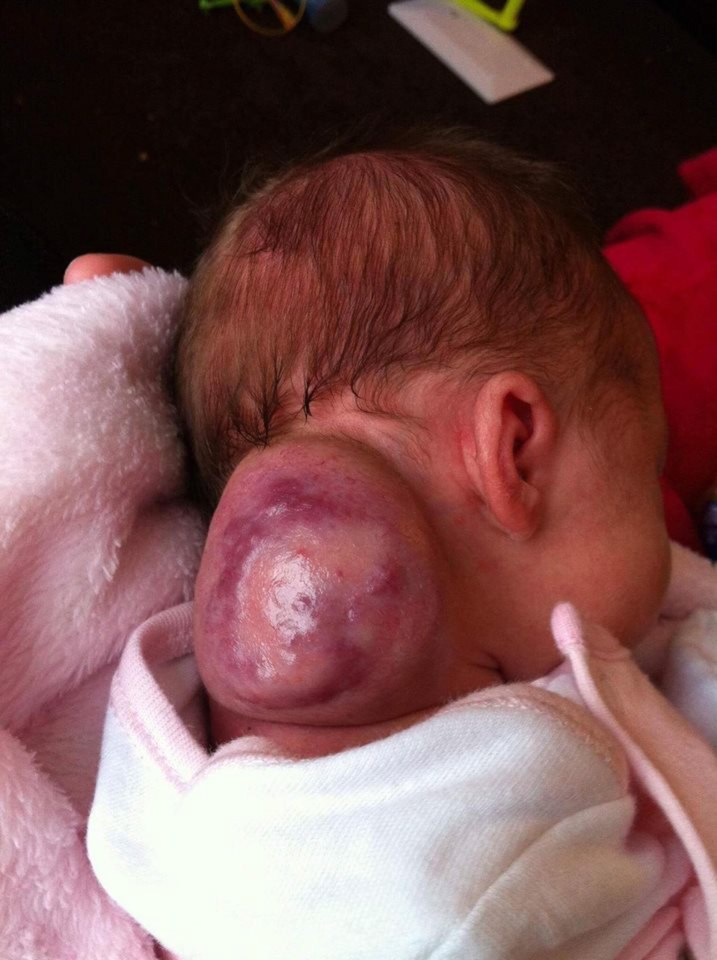 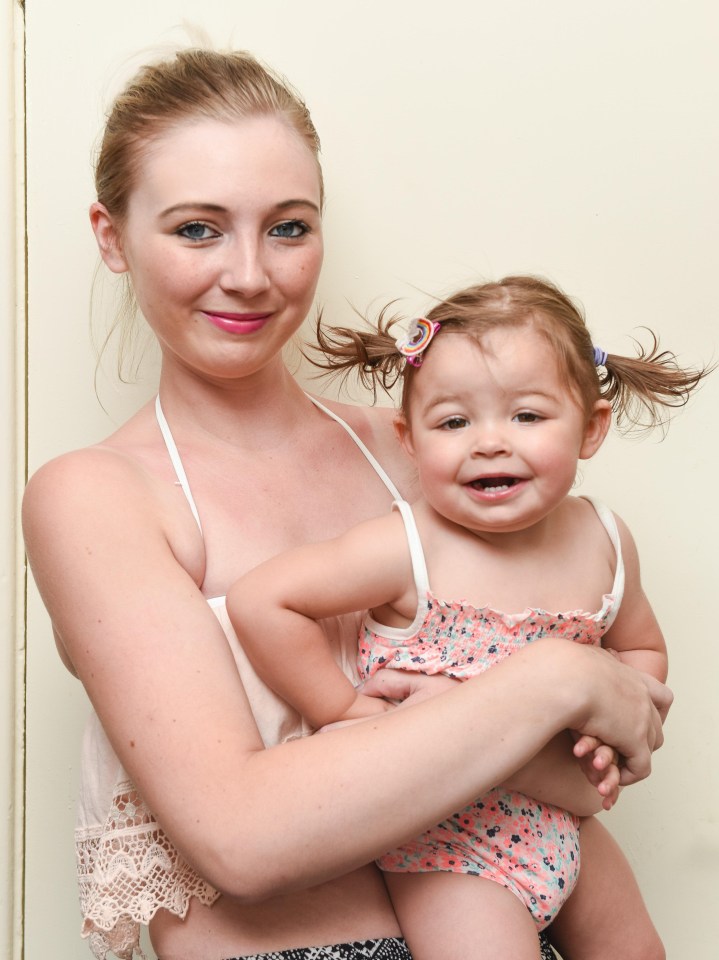 But Mila’s birthmark was not cancer at all.

Mila, now one, was born with a congenital hemangioma – or a collection of small blood vessels under the skin.

Page, 21, likened the tennis ball-sized lump to a “bag of blood” and admits she was terrified the birthmark would rupture.

The worried mum-of-two became obsessed with measuring the birthmark, which started to shrink after three months.

Now the lump has completely disappeared from Mila’s neck.

Paige, from Stoke-on-Trent, in Staffordshire: “I thought she had cancer. You see a lump and you just assume.

“I was in bits and in tears.

“For the first few weeks I thought she was going to die. It was really scary.

“It was the size of a tennis ball. It looked really big because she was so small.

“It was like another head. One of my friends joked that it could have been a twin but obviously it wasn’t.

“However, I knew that as long as she was breathing and she was okay that is what was important.” 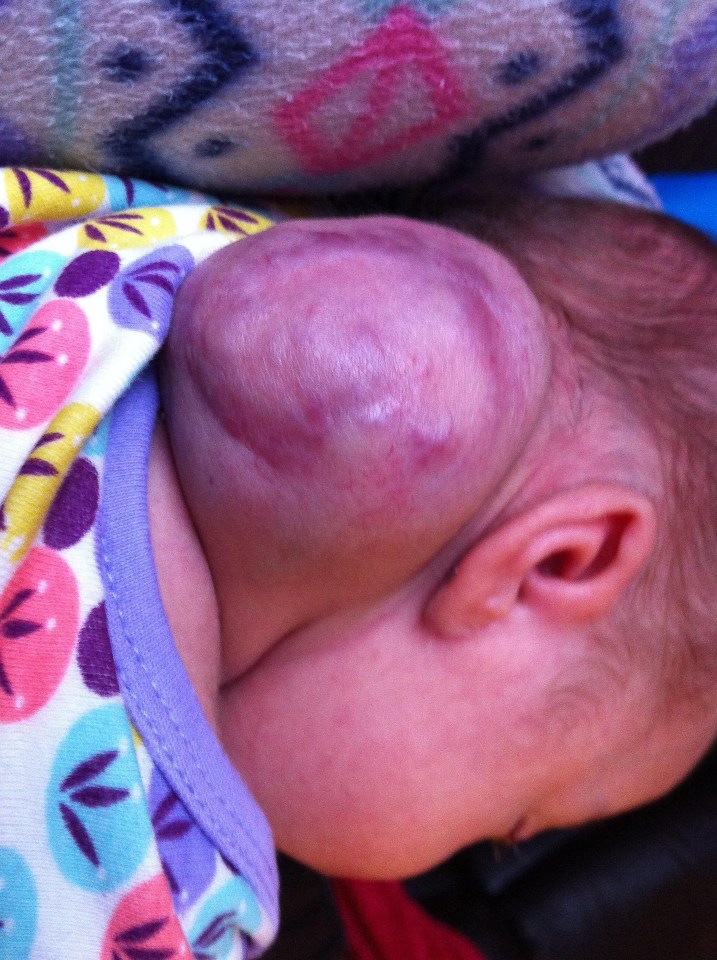 Mila’s congenital hemangioma began to shrink after she was born

A RICH grows while the baby is in the womb and they starts to shrink once they are born while a NICH may continue to grow after the baby is born in proportion with their growth rate.

PICH types can behave like a RICH and shrink after birth then stop at some point or one that was thought the be a NICH may shrink quicker, but it is not known why.

Mila was born with a RICH.

Paige said: “I was crying for weeks. It was a waiting game for a while because we didn’t know if it would ever go down.

“I was scared it was NICH. I was very anxious but I did my research, I discovered that if it was RICH it would start to shrink at three to five months. 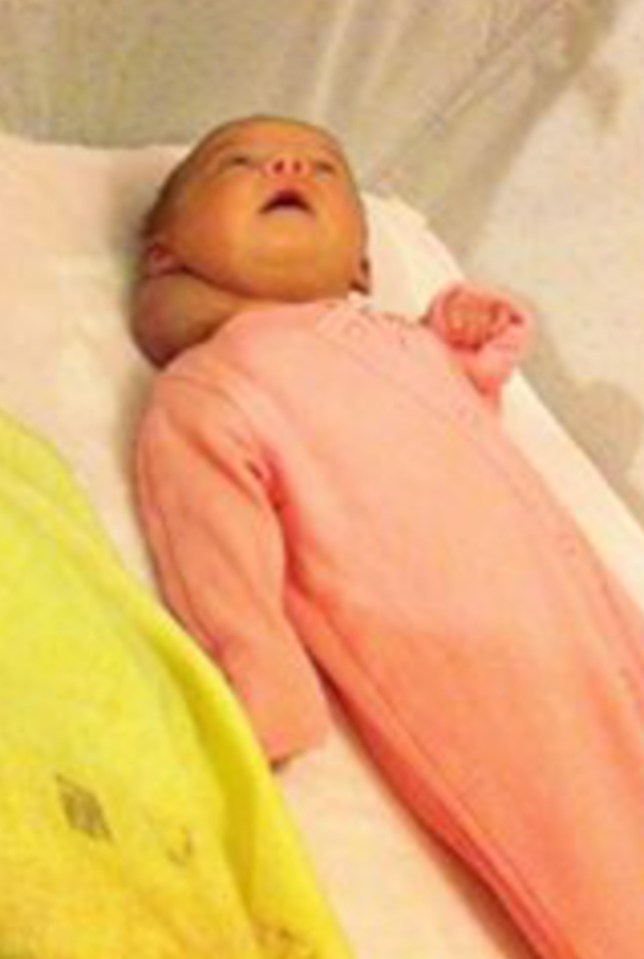 Mila used to use the lump as a pillow and her mum, Paige, does not believe it caused her any pain 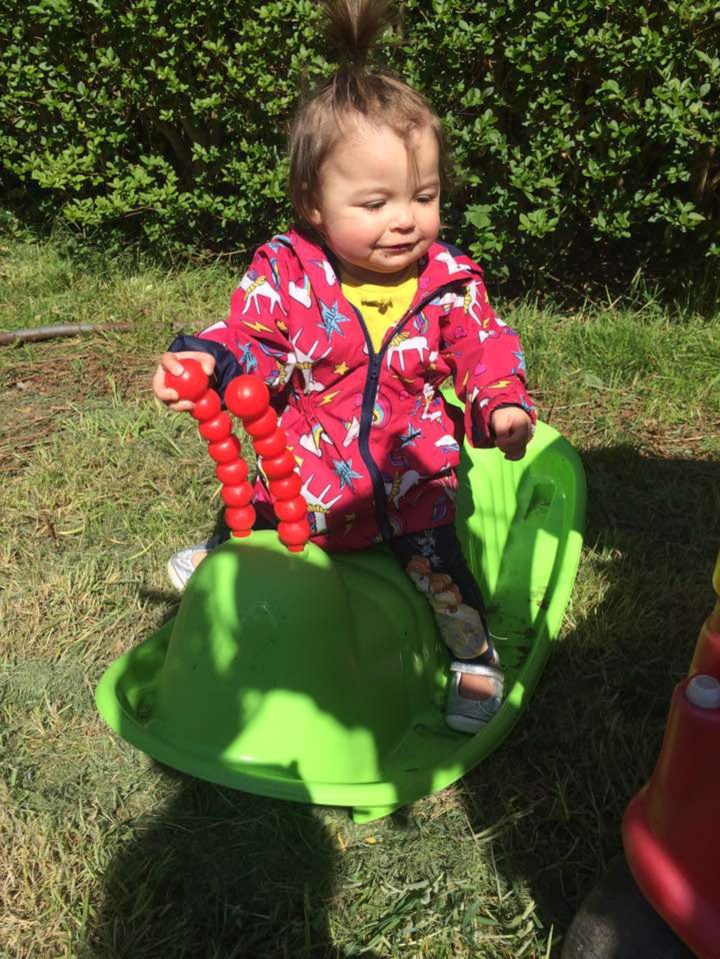 Mila, now one, no longer has the lump on the side of her neck

“I just wanted her to get to that age.

“There was a lot of worry it would affect her movement but it really didn’t.

“I thought she would need surgery, it was like a bag of blood. It can be dangerous.

“She has a strong neck and could give you a solid headbutt.

“I don’t think it caused her any pain. She used it as a pillow in the night and would lie on it.

“My other child, Harvey [3], didn’t have a birth mark but I would be worried if I got pregnant again.”

Mom Discovers She’s Pregnant With 5 Babies, Then Husband Leans Over Her As Nurses Pull Them Out
A new mom’s priceless reaction to having a baby boy when she expected a girl is going viral
Advertisement